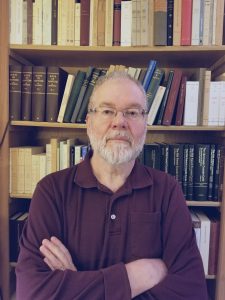 Keith Busby is Douglas Kelly Professor of Medieval French Emeritus and Fellow of the Medieval Academy of America. His previous positions were at the Universities of Utrecht and Leiden, The Netherlands, and the University of Oklahoma. He has held visiting appointments at The Getty Museum, Los Angeles, the Universities of Bristol and Durham (UK), the National University of Ireland, Galway, the École Nationale des Chartes, Paris, and has been Visiting Fellow at Magdalen College, Oxford (UK). He has also been International President of the International Arthurian Society and the International Courtly Literature Society. His research interests are in Old French literature of the 12th through the 14th centuries, particularly textual editing and philology, codicology, and the historical contexts in which literature is produced. In recent decades, he has developed the notion of “medieval Francophonia”. His principal publications are Gauvain in Old French Literature (1980), a critical edition of Chrétien de Troyes’s Perceval (1993), Codex and Context: Reading Old French Verse Narrative in Manuscript (2002), and French in Medieval Ireland, Ireland in Medieval French: The Paradox of Two Worlds (2017). His edition of the French works of the Irish Dominican, Jofroi de Waterford, is scheduled for publication in 2020, after which he is intending to re-edit and translate the Statutes of Kilkenny (1366). He then hopes to return to Arthurian studies in a book on the Continuations of Chrétien’s Perceval.