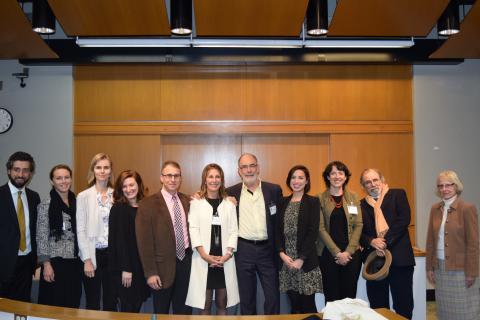 On October 12-13, 2018, the University of Wisconsin-Madison hosted a number of world-renowned scholars, who traveled from all over the country to convene on campus in honor of the 500th anniversary of Niccolò Machiavelli’s 16th century comedy, The Mandrake. The Symposium was organized by Professor of Italian and Art History, Dr. Kristin Phillips-Court, whose own research focuses on Machiavelli and the visual arts, among other topics. The event was generously sponsored by the Department of French & Italian, along with the Anonymous Fund, the Institute for Research in the Humanities, and the Departments of Art History and Integrated Liberal Studies.

“On Human Nature: Machiavelli’s Mandrake at 500” explored many themes over the course of the two-day event, including sickness and medicine, manipulation and flattery, politics and power, and religion and ritual. Scholars from universities such as Dartmouth, University of Washington-Seattle, Brown, UCLA, Johns Hopkins, University of Illinois-Urbana Champaign, Yale, and Notre Dame joined colleagues at UW-Madison to revisit established interpretations of Machiavelli’s famous play, and to posit new venues for exploration. The Department of French & Italian is honored to have had a role in this important intellectual endeavor!