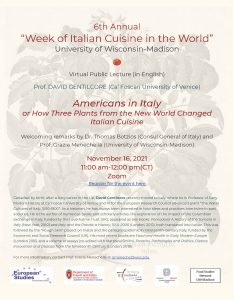 Imagine Italian cuisine without the tomato, or north-eastern Italy without its maize polenta. Not only did both of these plants originate from the New World, as did another lesser-known Italian staple, the potato; but initial reactions tended to be one of suspicion rather than acceptance. Centuries might pass before they were widely cultivated and consumed. Italy owes a lot to what has been called the ‘Columbian exchange’. That said, each of these three food plants has its own distinct historical trajectory: and this is what I would like to focus on during the course of this lecture. The factors determining which plants were assimilated, when, where in Italy, and in what ways – curiosity, condiment, staple food – can tell us much about shifting learned discourses and culinary ideas, as well as the broader socio-cultural context for changing dietary, agricultural and medical practices. 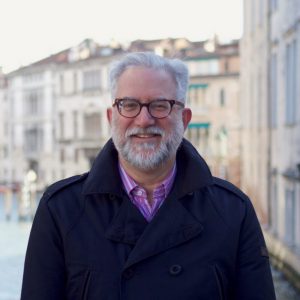 Canadian by birth, after a long career in the UK, David Gentilcore recently moved to Italy, where he is Professor of Early Modern History at Ca’ Foscari University of Venice and PI for the European Research Council advanced grant “The Water Cultures of Italy, 1500-1900”. As a historian, he has always been interested in how ideas and practices intertwine in past societies. He is the author of numerous books and scholarly articles. His exploration of the impact of the Columbian exchange in Italy, funded by the Leverhulme Trust (UK), appeared as two books: Pomodoro! A History of the Tomato in Italy (New York, 2010) and Italy and the Potato: a History, 1550-2000 (London, 2012), both translated into Italian. This was followed by the “Rough Skin” project on maize and the pellagra epidemic in nineteenth-century Italy, funded by the Economic and Social Research Council (UK). His most recent books are Food and Health in Early Modern Europe (London 2016) and a volume of essays (co-edited with Matthew Smith), Proteins, Pathologies and Politics. Dietary Innovation and Disease from the Nineteenth Century (London, 2018).

Sponsored by the Center for European Studies, the Department of French and Italian, and the Food Studies Network at the University of Wisconsin-Madison, the Italian Cultural Institute of Chicago, and the Consulate General of Italy in Chicago.

Register for the event here: Registration for Gentilcore’s Lecture