Paola Bonifazio, Associate Professor of Italian Studies at the University of Texas-Austin, presents her latest research on subversive readership, fandom, and the hybrid genre of the photoromance (also known as the photo-graphicnovel or photo-comics) in a virtual visiting lecture on Friday, December 4 from 2-3PM (CST). In her research and lecture, entitled “Shattered Mirror: Female Fans, Photoromances, and Meaning-Making,” Dr. Bonifazio takes an interdisciplinary approach, intermingling her study of storytelling with gender, media, and society. (Lecture will be in English.)

Professors and graduate students in the humanities are encouraged to attend. Please take the following 1-minute survey to register and receive the zoom link. The lecture will not be recorded. Individual cameras and microphones will be off during the presentation and on during the Q&A session. 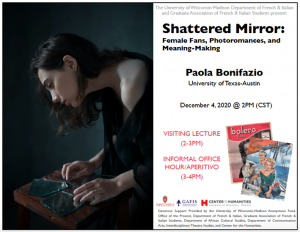 Also known as roman-photo (in French) and fotoromanzo (in Italian), the photoromance was born in Italy in 1947 and then successfully exported all over the world, selling millions of copies per week. A form of graphic storytelling, including captions and balloons but using photographs instead of drawings, photoromances were and are demeaned and chastised in public opinion, dismissed in scholarship as derivative forms of women’s literature, or attacked as tools of cultural domination. In particular, critics do not grant photoromance readers any agency, consistently attributing the stultifying and/or corrupting effects of narratives (in either moral or political terms) to the passivity, naïveté, or blunt stupidity of their consumers, particularly women. In their view, women would simply see themselves in the photographs, wishing to escape their daily lives in the fantasy of romantic plots.

In her presentation, Professor Bonifazio will explore the cultural significance of photoromance fandom through the analysis of representative cases from the late forties to the early eighties. Bonifazio will demonstrate that common derogative portrayals of female fans ultimately reveal not only cultural anxieties towards the spread of mass culture, but also political resistance against the possible appropriation of this culture by female audiences. Neither emancipated nor coopted by the media system, photoromance fans undermined the patriarchal order of Italian culture and society, particularly in the fifties and sixties, as well as the aims of radical feminist groups in the 1970s. Bonifazio’s analysis will show the importance of a common identity and a shared culture in relation to individual responses to mass-produced cultural texts. Fans shattered the mirror, and fandom helped them pick up the pieces.