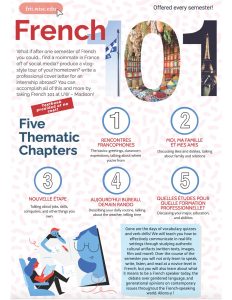 For students with no previous training in the language; oral practice and conversation, grammar, reading, vocabulary building, and study of French and Francophone cultures.

Read about this course 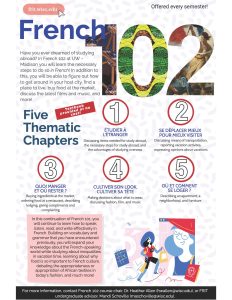 Read about this course

Development of oral and written skills, based on reading and discussion of contemporary socio-cultural topics.

Pre-Requisite: FRENCH 203 or appropriate score on placement exam.* *Open to entering Freshman students only, non-freshman who place into this course should take FR 228 instead.

Enhance writing and speaking proficiency through cultural readings on France and the francophone world. Review of grammar and focus on more complex grammatical structures. A required prerequisite for the French major. Classes conducted in French.

An introduction to reading and analyzing literary works, with special emphasis on the development of writing skills in French. The program will concentrate on shorter works from the major genres of French literature, and prepare students for future study of literature. Classes conducted in French.

French 285: Rebellious Women, From the Middle East and North Africa 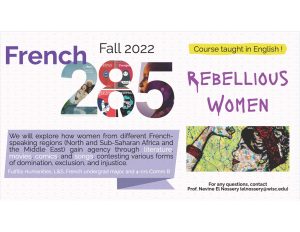 Explores how women from different francophone regions (North and Sub-Saharan Africa and the Middle East) gain agency through literature, movies, comics, and songs, contesting different forms of domination, exclusion, and injustice, based on gender, race, class, and religion. 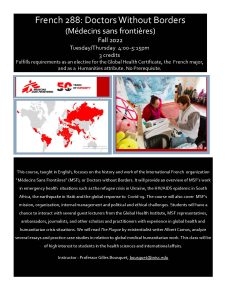 An overview of the global humanitarian NGO, Doctors without Borders (or Médecins sans Frontières, MSF) including its history, mission, organization, and the cultural, political, and ethical challenges it faces. Explores issues of global health, social justice, and humanitarian action. Features distinguished global practitioners with first-hand experience in health crisis situations.

Trains students to write essays on a variety of topics, using different registers of French, and work to correct pronunciation and improve conversation skills. Classes conducted in French.

Study and analysis of the culture and sociology of professional environments in the French and Francophone worlds, including government, international organizations, NGO’s and business. Students develop communication skills through interactive teaching methods in multimedia labs.

Introduction to important literary works from the medieval era to the French Revolution. Classes conducted in French.

French 322: Introduction to Literature of Modernity

Introduction to important literary works of modernity (from the French Revolution to the twenty-first century). Classes conducted in French.

An introduction to the political, social, intellectual, artistic and literary development of French culture, from its origins to the French Revolution (1789).

An introduction to political, social, intellectual, artistic and literary developments in French and Francophone culture, within the time period from the French Revolution to the current era. 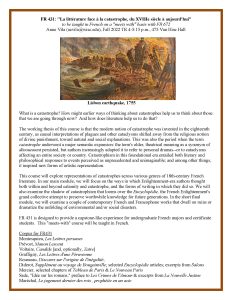 Exploration of a thematic selection of texts from the Early Modern period.

Conversation and writing practice, review of grammar, and class reading of a modern Italian novel.

A survey of Italian history, literature, art, music, politics, and popular culture of the 20th-21st centuries.

Development of accurate and nuanced capacity for expression in Italian and for understanding the spoken and written language. Also addresses Italian phonetics and phonology to develop accurate pronunciation.

Italian 321: Studies in Italian Literature and Culture I

Examination of Italian phonetics and phonology, morphology and word formation, and syntax, with attention to contrasts with English. Prepares for advanced courses in Italian linguistics.

Introduces students to the major works of Machiavelli through the close reading of his writings in cultural and historical contexts. Discussion and targeted writing assignments will aim at cultivating in students 1) a broad understanding of Machiavelli’s principal intellectual attitudes, 2) a deeper understanding of his literary sensibility, and 3) the ability to articulate controversies and complexities surrounding his thought.

Covers Italian history and culture from the Unification (1860) to the 21st century.

Have you ever wondered what it was like to live during the Black Death? Were our medieval and early-modern ancestors different from us, or are we challenged with similar problems? What can we learn from their lives? And, if we could, what could we teach each other? Discuss these topics while reading one of the world’s greatest literary classics, Giovanni Boccaccio’s Decameron, a text that will make us both laugh and cry. Through reading the Decameron, investigate medicine, art, culture, music, politics, religion, interpersonal and transcultural relations, warfare, fashion, gender and gender roles, as well as everyday life in the Middle Ages and early modernity. Also examines medieval written documents, twentieth-century feminist responses to the Decameron and filmic renditions of it, medieval frescoes, historical descriptions of the plague, and modern descriptions of, and reactions to, the COVID-19 pandemic.

Treatment of a specific perific period, genre, theme or movement in Italian literature

French 672: Topics in Literature and Culture

The modern notion of catastrophe was invented in the eighteenth century, as causal interpretations of plagues and other cataclysms shifted away from the religious notion of divine punishment, toward natural and social explanations. This was also the period when the term catastrophe underwent a major semantic expansion: the term’s older, theatrical meaning as a synonym of dénouement persisted, but authors increasingly adapted it to refer to personal dramas–or to cataclysms affecting an entire society or country. The massive earthquake that destroyed Lisbon in 1755 was a key historical catalyst for some of those shifts: Walter Benjamin would later argue that this disaster “singular and strange” deeply affected modern thought and literature from Voltaire to Kant and beyond. So, too, was the idea, popularized by Jean-Jacques Rousseau, that the very foundation of human society was a calamitous event. Catastrophism in this foundational era entailed both literary and philosophical responses to events perceived as unprecedented and unimaginable; and among other things, it inspired new forms of artistic representation.

Using a conceptual framework inspired by contemporary theorists (L. Boltanski, J. Baudrillard, J.-P. Dupuy, F. Walter, M. O’Dea, M-H. Huet, etc.) as well as historical thinkers, this course will explore representations of catastrophes across various genres of 18th-century French literature. In our main module, we will focus on the ways in which Enlightenment-era authors thought both within and beyond calamity and catastrophe, and the forms of writing in which they did so. Here, we will read authors such as Montesquieu, Prévost, Voltaire, Diderot, Graffigny, Mercier, Sade, and Sylvain Maréchal–author of Le Jugement dernier des rois (1793; this is a “volcano” play of the Revolutionary era). We will also examine the shadow of catastrophism that looms over the Encyclopédie, the French Enlightenment’s grand collective attempt to preserve worthwhile knowledge for future generations. Students will work in teams for this mini-module on the Encyclopédie, and follow the threads of renvois that link a particular set of Encyclopédie articles or plates. In the short final module, we will examine a couple of contemporary French and Francophone works that dwell on ruins or dramatize the unfolding of environmental and/or social disasters.

Students in FR672 will have the option of doing either a traditional final research paper or a hybrid final project that combines a pedagogical element (a course syllabus, for example) with close literary analysis on a selected work; either sort of final project can focus on the 18th century, or it can be transecular. More details on assignments will be provided on the syllabus.

Note: this course is mandatory for all grad students working under the new, most recent guidelines. Students grandfathered in under the old guidelines are certainly welcome to take it, but are not obliged to. It should be taken the first time it is offered after a student has already
completed one year in the program (i.e. should not be taken by incoming first-year students).

Introduction to teaching collegiate world languages with an emphasis on communicative and literacy-based pedagogical strategies.

The work of the course will include two papers (total length: 20 pages max.) and an oral presentation. 1-2 critical readings will accompany each work, but the pace of reading, one play per week, should be quite doable. The entire seminar will be conducted in French. Students from other departments may do their writing in English.

Systematic study of the earliest literary texts in Italy; the rise of the love lyric among the Sicilian poets; representative narrative works. The development of the lyric from Guittoe d’Arezzo to the poets of the Dolce Stil Nuovo.

In-depth exploration of periods and concepts of Italian literature, from the Middle Ages to Baroque period.